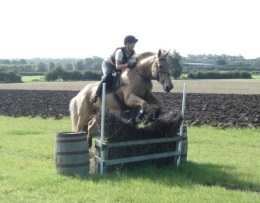 ‘Maisie suffers from narcolepsy which has led to a lot of discomfort in her neck and back.  Regular treatments from Una make her more comfortable which reduces the tension when she is ridden.  Thanks to Una, Maisie is now working with a much more relaxed attitude and is building up more muscle over her topline.  Our dressage marks are improving too!’  Jenny Yates

‘Having my horse repeatedly throw me off the right diagonal in trot I sought explanation from various sources all of which proved incorrect. A friend who had encountered similar problems recommended I seek advice from Una. Following a thorough examination a rotated and tilted pelvis was diagnosed. Una then applied her McTimoney techniques along with some massage. The improvement was immediate and quickly disappeared. Now with a periodic check-up and maintenance the problem is totally manageable. I would have no hesitation in recommending Una to other horse owners.’  Sarah Stonehill

‘Una first treated my horse a few years ago when I started to notice her canter work becoming increasingly crooked. Una came and treated her and diagnosed a tilted and rotated pelvis, afterwards our canter was straight again! My mare now has regular treatments from Una keeping her competition fit. I would highly recommend Una to anyone and as a groom I have recommended her to all my clients.’  Liz Whiting 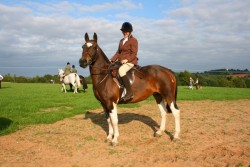 ‘Una has treated my mare on several occasions, in both the capacity of regular check-ups and also when I have experienced a particular problem.  For example, I was finding Bijou to be feeling short on her left fore when riding and also to look at in hand so I asked Una to come and see her.  Una found that she has some misalignments in front of and throughout her withers which were causing her some discomfort.  Una also found that she had a slight rotation and tilt on her pelvis, which was probably related to her compensating for the discomfort she felt in front.  Since Una performed her treatment, Bijou has been much happier and is more equal in her forelimb action now.    I always find Una punctual, polite, and very knowledgeable.  She treats my horse efficiently and professionally, explaining what she is doing and offers advice on any stretches or exercises which may help.  My mare also loves the treat she gets at the end of the treatment!’  Helen Collings 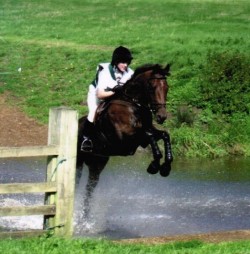 ‘At Closes Farm we work mainly with point to pointers and ex-racehorses, Una is an essential part of the team for getting these horses right and keeping them right. Kate is an ex-racehorse who had problems with her teeth whilst in training which caused a huge amount of tension through her neck and back making her very one sided and difficult to ride. After regular treatments with Una she showed massive improvement and eventually began to relax and enjoy her work and since then she has been great fun eventing and on the hunting field. I would highly recommend Una and McTimoney as many of our horses don’t just tolerate being treated they actually enjoy it too!’ Kirsty Woodfield, Closes Farm

‘When I first got Ruby she was a straight off the track three year old and a challenge to keep weight on. I was constantly stressing over how to help her put on the pounds to get her ready for retraining; she almost seemed too frail to ride.

I covered the basics such as a correct diet, worming regime, bloods and teeth with limited success. I then contacted Una to see if pain could be the cause of her weight problems.

In one session Una found misalignments throughout Ruby’s neck and back and a marked rotation and tilt in her pelvis, she treated Ruby using the McTimoney technique and offered some advice on aftercare following the treatment.

A month later and the little horse began to improve, I am certain that Una’s treatment was a turning point for Ruby.

In hindsight, watching her race as a two and three year old you could clearly see her running with her neck arched to the side – the simplest thing has helped all the pieces fall into place and allowed us to get on with retraining.”  Victoria Evans 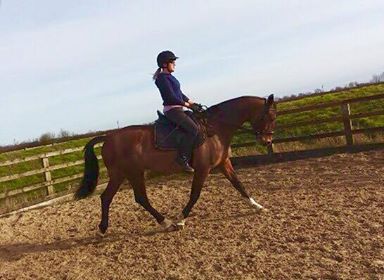 “Una has been great with my mare (who quite frankly is an idiot most of the time). Bean has a tendency to run round like a crazed thing in her field and consequently fall over and pop her various limbs out of place. Una has always popped them back in with a smile, come out last minute when I was in a panic and always be on the end of the phone if I was worried about something. Bean is coming on really nicely now, and I’m sure it’s down to Una managing her growth spurt induced wonkeyness! I would happily recommend Una to anyone looking for a knowledgable and friendly equine specialist”